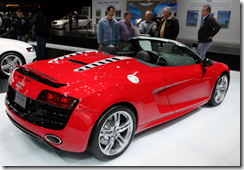 Some of us wait with fear that eventually you will not be allowed a car, it would drive itself. Others embrace this as the next logical step. If you want to drive it yourself, you would go to a track.

Now along that lines some the Audi R8 with, you guessed it, an eSound to warn “absent-minded pedestrians” that they are about to walk in front of a moving vehicle.

I am not sure how I feel about the eSound. You can hear it in the YouTube video below. Suzy and I drive a Lexus HS and people marvel at the soundless quality of the car. It almost makes you feel like you are gliding rather than driving. Almost.

Audi’s not the first manufacturer to cover its legal posterior with sound effects in its electric vehicles, and it certainly won’t be the last. Well, at least Audi’s interpretation sounds like a futuristic gas guzzler, rather than a tree full of chirping birds.

Driverless, soundless, and gas-less cars, oh my. What will they think of next?