As the founder of a number of music ensembles I have always meant to write an article like this. Christiana does it better. Pictures from my collection by various photographers, some of which I know.

A band is a unique and complex relationship, and with so many different personalities and goals among band members, things can sometimes get tricky. Some people are direct, some are passive, some are more organized than others. “Musicians are sensitive and odd creatures,” says songwriter/guitarist Paul Hansen of indie folk band The Grownup Noise. “So inevitably, it will be a dysfunctional, but hopefully loving, family.”

When you’re creating, performing, traveling and practicing with the same people for hours on end, there’s no question that leadership within the band is essential to get everyone on the same page, manage expectations and create camaraderie. “There’s no ambition without leadership,” says Brooklyn-based multi-instrumentalist Jeff Tobias. “Bands that function as total democracies can frequently be sluggish and often unsatisfying. In any case, someone needs to be steering the ship.”

Leadership can come in various forms. Some have one appointed leader, whereas others have many leaders, acting more democratically. “If it’s a benevolent dictatorship where one person is in charge but they make it engaging and fun, that can be great,” explains Jeff. “If the band has more of a collaborative dynamic, then the leadership role can rotate when appropriate – for example, one person can lead on booking, the other person can lead on artwork, etc.”

No matter what your band’s unique culture is, these 10 essential leadership qualities will help you navigate just about any situation you encounter with your bandmates.

1. Professionalism
Musicians are sometimes stereotyped as partiers or just downright unprofessional people, but any band with aspirations of making it big knows just how important it is to prove that wrong. As we all know, music is an incredibly challenging career that requires a ton of knowledge, years of practice, discipline, creativity and organization. The hard work behind it all can be taken for granted. One way to set the precedent for being respected and get the results you want is to maintain high standards of professionalism.

This includes scheduling rehearsals and shows in advance, being on time, being totally prepared for rehearsals, promoting your shows in advance replying to emails and phone calls in a timely fashion. Professionalism helps present the band in a positive light to the outside world while also setting an example for internal expectations.

Someone might be a brilliant songwriter and have lots of great ideas, but a good band member becomes an amazing band member if he or she is also on time, respectful, organized and prepared.

It’s going to take a lot of time to get to where you want your group to be, so enjoy the journey. If you’re too eager, you might shoot yourself in the foot. Gather the right people for the genre and instrumentation you’re looking for, and then practice, practice, practice before performing or recording. Make sure band members are comfortable with the material, and if they need extra practice, schedule time for it before booking your first gig or studio session. The right things will line up if you’re patient, positive and humble.

3. Respectfulness
Just like in a relationship, each person’s expectations and needs should be discussed. Remember that each musician brings his or her own expertise, talents, ideas, personal goals and passions, so let that flourish. If someone feels taken for granted, unappreciated or overworked, resentment might build up and affect the music and performances. On the other hand, if members feel valued and appreciated as individuals, they will be amped up to bring positive energy and ideas to the group.

“If someone’s going to grab the reins, they should appreciate the support of other musicians and behave accordingly,” Jeff Tobias says. “A good bandleader should inspire confidence and interest in the other musicians, making their time and efforts feel worthwhile.”

When someone does something well, give positive feedback – it’ll motivate them to perform at their absolute best more often.

4. An Open Mind
The creative process is a vulnerable experience. When you’re working as a group to create new material or learn new songs, there will inevitably be moments of imperfection. Since learning styles and creative vision will vary from person to person, it’s important to stay open-minded throughout the whole process. Have a brainstorm session, let the creative juices flow, and allow people to contribute and play around with ideas. This will happen more freely if the leaders create a supportive atmosphere. When the leader(s) make final decisions, band members are more likely to support it they were able to contribute their own creativity in the process.

Even though many aspects of a band can change and develop over time, it’s good to at least have a sense of what you’re creating and the direction it’s heading. This requires some preparation and thought ahead of time. It’s important to be able to see the big picture as well as all the little details. Ultimately, it’s up to the leader(s) to visualize, communicate the concepts and determine what needs to be done to materialize that vision.

6. Ability to Delegate
Sometimes, it’s just too much responsibility for one person to handle all the details. “In my own experience, it seems best to have two leaders in the band,” says Paul Hansen. “That way, the one leader won’t be overwhelmed and alone, but also there won’t be too many cooks in the kitchen.”

If you have too much on your plate, delegate – and be clear about it. No one wants to be the one loading all the equipment at the end of the show while the others socialize, or the one marketing the band while others aren’t taking it seriously. If multiple members of the band have responsibilities beyond learning their parts, it’ll become more equal and enjoyable for everyone.

7. Strong Communication
It’s super helpful for the other band members if the leader(s) express their ideas, goals and vision. This can be anything from genre to frequency of gigs to long-term vision. It’s also important to lay down the logistical expectations: everyone coming prepared to practices, being on time, making their availability known so you can schedule gigs, etc.

“The most high-functioning bands that I’ve been in benefited from well-defined roles and reasonable expectations,” Jeff adds. It’s up to the leader(s) to set expectations and to hold the band members accountable for it. Even if you’re the passive type, you’ll learn fast that the best thing to do is be direct and open when something is bothering you. Otherwise, it may spill into other aspects of the band and affect the enjoyment of collaborating and making music. Although it may feel a little awkward, it’s perfectly okay to call someone out if he or she is not living up to the band’s expectations. No one wants to put up with that person who never practices and slows the rest of the group down, so it’ll actually ease the tension in the long run.

8. Decisiveness
Good bandleaders have to be able to think quickly and be confident in their decisions. For example, if it turns out that there’s only time for one more song instead of two at your show, everyone in the band should automatically know who will choose the final song. Discussing it for several minutes on stage just looks unprofessional, and you lose valuable playing time in the process. 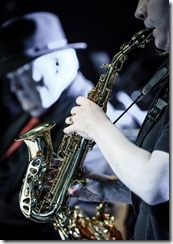 It’s okay to give guidance, but you also need to give people some control. A strong leader is able to catch himself/herself before micromanagement rears its head. Even if you don’t fully agree with your bandmates’ opinions, at least support them by acknowledging that their opinions matter so they don’t feel like just a cog in the machine. They’ll be more invested in the long run. Self-awareness means treating your band members, engineers, publicist, techs, venue staff (and pretty much anyone you’re working/collaborating with) as you’d like to be treated if the roles were reversed. Really, it’s a pretty good life rule.

10. Motivator
You’ll get 100% from your bandmates if everyone is having fun and feels motivated. Recognize that your band members are carving out time in their busy lives to learn the songs – possibly for not a whole lot of money – when they could be doing other things. Make it an enjoyable and stimulating experience for everyone involved.

Just an itinerant saxophonist trying to find life between the changes. I have retired from the Corps of Engineers and Microsoft. I am an admin on the Woodwind Forum, run the Seattle Solid GOLD Big Band (formerly the Microsoft Jumpin' Jive Orchestra) a GOLD sax quartet, and enjoy time with family and friends.
View all posts by Gandalfe →
This entry was posted in Band Management, FAQ, Guides, MJB, MJJO and tagged leadership, Usenza. Bookmark the permalink.