Why I’ve Grown to Hate Most Employee Feedback Systems 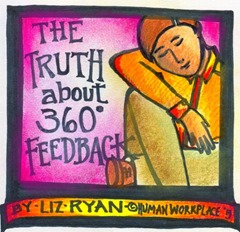 In the past 22 years, I have noticed that most corporations solicit feedback from all levels of a team, but when using them to *help* an employee improve, the feedback is used in a way that leaves out specifics, so that the help is not really actionable. Is anonymous, context-free feedback the best we can do?

Rather than rant and rave on this, here is a lovely article by Liz Ryan of the Human Workplace that addresses many of the current feedback systems shortcomings.

I was a fan of 360-degree feedback for a year or two when the idea first hit the HR world around 1990. I’m not going to say that I regret my enthusiasm back then, because life is all learning, but I certainly don’t feel the same way today.

We’ve always known that stacking people up one against the other is the world’s worst way to lead. Our clients have been quietly shedding their Forced Ranking systems for a decade now. These organizations have evolved past the need to pit teammates against one another in a real-life version of Survivor: Battle for the Last Cubicle.

Just an itinerant saxophonist trying to find life between the changes. I have retired from the Corps of Engineers and Microsoft. I am an admin on the Woodwind Forum, run the Seattle Solid GOLD Big Band (formerly the Microsoft Jumpin' Jive Orchestra), and enjoy time with family and friends.
View all posts by Gandalfe →
This entry was posted in Education, Employment, FAQ, Guides and tagged Liz Ryan. Bookmark the permalink.