“A computer once beat me at chess, but it was no match for me at kick boxing.” ~ Emo Philips

Suzy and I decided to replace our twin Dell desktop computers from 2007. I like and buy from Dell because:

Since we like our current monitors, we did add that to our order. Mostly for my reference, we are getting: 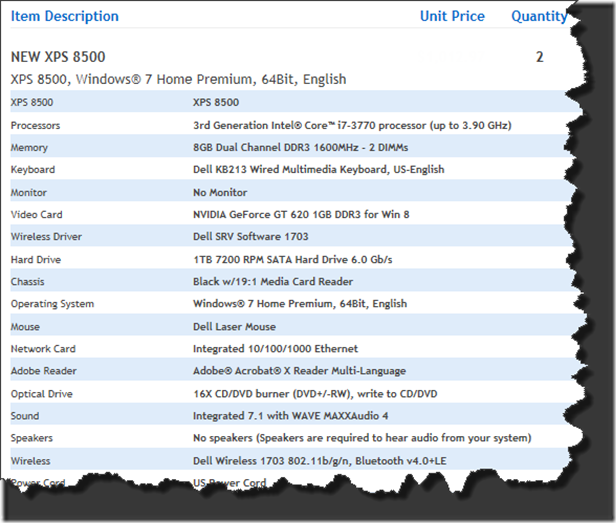 We considered going to laptops or tablets like our kids do, but I really like the desktop. Truth be known Suzy’s iPad II and my Kindle Fire HD are great, but when we are banking, we don’t want to be doing it on a portable device.

I do kinda dread moving all the data from my computer to the new one as on my computer it’s over 200 Gigabyte! Yikes! Fortunately Suzy has much less on her computer. And now that I use Amazon Cloud Player, I probably won’t be putting so much music (80 G) on the new computer. Cleaning up is nice because I archive stuff and find, that besides pictures, I almost never look at the archive DVD again.

We will be trying to decide which relative will get the old computers from 2007. Usually the computers get grabbed up really quickly. But in today’s world, maybe people don’t wanna be anchored to the old reliable desktop computer. We’ll see…

Just an itinerant saxophonist trying to find life between the changes. I have retired from the Corps of Engineers and Microsoft. I am an admin on the Woodwind Forum, run the Seattle Solid GOLD Big Band (formerly the Microsoft Jumpin' Jive Orchestra), and enjoy time with family and friends.
View all posts by Gandalfe →
This entry was posted in Commuting, Computers and Internet, Everyday Science, Guides, Quote and tagged Dell, Emo Philips, iPad, Kindle Fire HD. Bookmark the permalink.