Halloween is almost here
goblins and ghosts, oh the fear!
Pumpkins, black cats and witches too,
Bobbing for apples and witches brew.
So jump for joy and sound the horn,
relax and have some candy corn!

I was at a Woodinville Community Band board meeting this weekend and the hostess served us, among other taste treats, candy corn. On of the board members regaled us with the history of the candy treat. 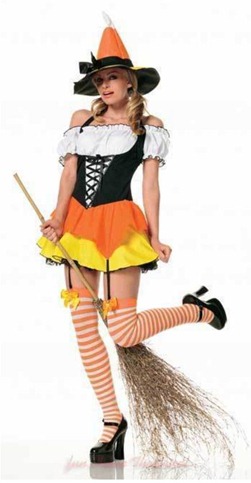 Candy corn first appeared in the 1880s. It’s creation is credited to George Renninger of the Wunderle Candy Company; the three colors of the candy mimic the appearance of kernels of corn. Each piece is approximately three times the size of a whole kernel from a ripe or dried ear. Candy corn is made primarily from sugar, corn syrup, artificial coloring and binders. Candy corn pieces come in three colors: a yellow end, a tapered orange center, and a pointed white tip.

The National Confectioners Association estimates that 20 million pounds (over 9000 tons) of candy corn are sold annually. The top branded retailer of candy corn, Brach’s, sells enough candy corn each year to circle the earth 4.25 times if the kernels were laid end to end.

Those who know me know that I have a thang for Halloween costumes. I must admit the pictures on the Internet of the comely lass in the candy corn witch costume is one of my favorites. Here in Seattle though, with temps around 50 degrees, and with the chance of rain, I suspect these kind of costumes will be relegated to adult parties.