Since I started using a scooter to go to work, I have not ridden my Trek 710 10-speed very much. So this Labor Day I’m thinking of taking a spin down the fabulous Burke-Gilman trail. Starting in Redmond, it’s a very tame ride with very little in the way of hills as it winds around picturesque Lake Washington.

My bike is turning out to be a bit of an oddity now-a-daze. I expected that curiosity and crowd-drawing ability with my ‘57 Schwinn Wasp, but not my modern ‘79 Trek.<smile> Not only is a ten-speed bike a bit of a rarity around these parts, but it has a way cool seat that was designed by a NASA scientist. All though it never sold well, it is the only seat I’ve ridden that cured my TB (tired butt). 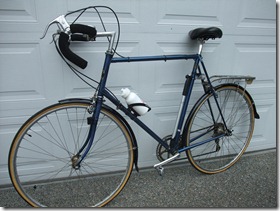 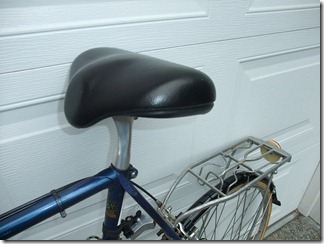 I also moved the shifter from the down-tube location that I used all the way through college to the handle bar location. The rack is from the 70s and I threaten to get a slicker, black, nice looking one but I don’t ride enough to justify the expense. The AARP water bottle used to make me laugh, but not so much any more. I immediately removed the kickstand from the bike when I purchased the Trek because it was just an excuse to make the bike fall and added unnecessary weight to the bike.

It more fun to ride with a friend, but as I didn’t plan ahead, I probably will be going alone with my trusty cell fone at the ready should anything like a flat tire or such come up. I used to carry tools with me when I commuted regularly but I don’t do that on bike anymore. I also use a puncture resistant inner tube that seems to have increased the distance between flats significantly.

It’s gonna be warm this weekend, so the ride in the morning would be just the thing. Maybe I can join in on the Fremont Solstice Parade bikers next year.

Just an itinerant saxophonist trying to find life between the changes. I have retired from the Corps of Engineers and Microsoft. I am an admin on the Woodwind Forum, run the Seattle Solid GOLD Big Band (formerly the Microsoft Jumpin' Jive Orchestra), and enjoy time with family and friends.
View all posts by Gandalfe →
This entry was posted in Bicycles, Hobbies, Vintage and tagged Burke-Gilman, Fremont, Lake Washington, NASA, Schwinn, Solstice, Trek, Wasp. Bookmark the permalink.