Big Band: Can the Clutter!

Further guidance from my friend Terry Stibal, a professional musician and band manager with his latest band, the Sounds of the South Dance Orchestra.

We had a video made of our group once, something that I have never had the opportunity of doing in the past. (A guy who did videography was pursuing one of the vocalists, and he thought this would get him somewhere.) A week or so after the gig, I sat down and watched the result.

The music and overall performance was just fine, especially considering the very limiting venue we were operating within. But, I took the time to watch the video with the sound off, looking instead exclusively for video cues that would catch my attention.

The performances were okay to good. The “jazz style” singer, the one with the prospective boyfriend, did another six tunes that were new to her (and somewhat out of her comfort zone to boot), and she communicated well with the audience while she did them.

But those actions of another girl singer pointed out one of the factors that virtually scream “RANK AMATEURS!!!” to each and every listener/viewer – she went out with a music stand for her big, fat binder of charts. Whenever she was up, the big black monster (with the misdirected light) was there as well, cutting her off from half of the audience. (Keep well in mind that a stand, even placed low, is a massive obstruction when viewed from below the stage.) She also needed, for some obscure reason, to have a mike stand nearby, putting one more obstruction in place.

Here she is, in full spate in a disco number:

Needless to say, the portions of the video (and the two times she left her stand and that misdirected stand light in place aftershe left the stage) were a horror to view. Sound-wise and presentation-wise, she did more than okay, but visually – a real bummer.

Sitting in a group as I have for so long, I sometime tend to lose sight of the forest for the trees. While it’s hard for the sidemen to have each and every note memorized, I do know that singers (at least the ones that I know) sing intervals– they start off at a pitch and relate subsequent notes to that starting pitch.

Doing this allows you to get by with only cues from the music to catch the initial pitch, and allows the vocalist to concentrate on the words. Once they have that down pat, they can move to the “entertainment” level, all without the stand.

But, the lady in question could not get by without her big book of songs and lyrics, and her stand, andher stand light. It wasn’t that she didn’t know the tunes – I tested that without a stand at the next rehearsal. She did her standards without the stand, and did them as well as she would have during the performance.

But, she needed that crutch when working to a crowd, I guess. (She does combo work without the stand – I’ve seen her do it – but she probably didn’t feel as comfortable with our stuff for some reason.)

And, then there were the microphone stands. With as many as five singers out on the stand (for Twist And Shout), keeping those mikes safe and sound and in place involved microphone stands. Even if they are black, they still obstruct things quite a bit, as we see here with the lovely Anissa>

So, after the next rehearsal, I brought the vocalists together, showed them the horrible images of singers singing with a stand in front of their face (there were examples for all), and announced that we were going to work towards the “no music stand” standard for all future engagements. We never saw that gal with her binder again.

Coincidental with that job, we next had a “musician only” job, backing up a hired gun vocalist. That was my first “up close” experience with modern cordless microphones, and it changed me from a cordless mike hater to a cordless mike lover.

I was used to the 9-volt battery cordless equipment, with all of the battery drain and lost signals. None of that with the new stuff, and the AA batteries were a whole lot cheaper in the bargain. 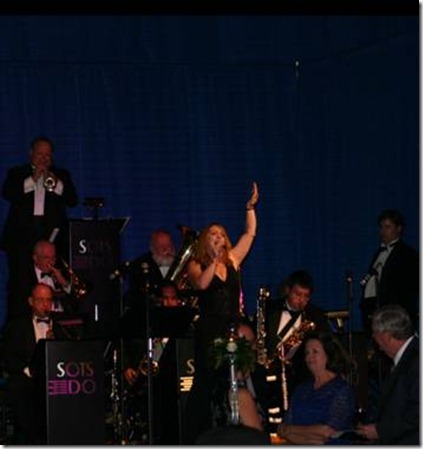 The net improvement of these two moves was striking – no more obstructions, a better view of the vocalists from all angles, and no more tangled mike cords. And, the effect was immediate. The lovely blonde lady seen above – Karron is her name – was seldom featured in any candid, performance photographs, simply because there is always a mike stand or a music stand in the line of sight. Now, open sight lines all around, as we see with the lovely Anissa here:

(This was taken with the old mikes – I don’t have any good shots with the cordless kit just yet.)

We still have mike stands – I use them for the instrumental soloists to bump them up a level while standing in the band, and we have four for the occasional tune that features a group of backup folks movin’ and groovin’ whilst they sing. But, they stay off to the side when not in use.

Also, I found a shot where the boys in the back were engaged in their haberdashery duties. I’ve never asked a photographer (ours have mostly been volunteers) to catch them in the act, but this photo shows them about halfway there. 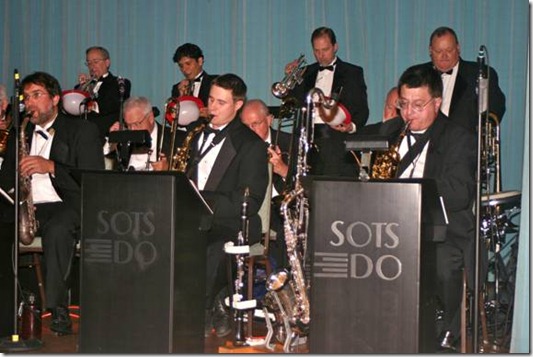 The red and white color scheme of the hats really “pops” against the otherwise somber background of the group when the hats are waved about while in concert dress, and it adds both color and flash to the performance.

In the back of my mind, I have a plan to have an auto body shop redo the hats in black tops with holographic silver flakes, and a silver sparkle interior. Haven’t got around to it yet, though. I don’t know if I can ever get them to do the Glenn Miller antics from the movie Orchestra Wivesthough.

I have moved away from the “big band” concept, unless we are marketing to a organization that wants a 1940’s look and feel. Placing your group in the “big band” fold automatically type casts the group.

And, for most, the term “big band” automatically invokes images of Glenn Miller, Tommy Dorsey and Benny Goodman, swing dancing, and lyrics that include “No, No, No!” and “Choo-choo”.

That’s exalted company, to be sure, but it’s also the exact kind of image that turns off the children (and the grandchildren) of the very people likely to be doing the hiring. And, we all know that we like to be hired.

There are people currently in old folk’s homes/nursing homes who came of age when entertainment meant the Beatles and Rolling Stones. And, those who came of age during the 1970’s are now the folks with the money and the need to entertain.

So, I long ago canned the term “big band”, and have drilled everyone else in the basic marketing approach to take when asked, “Oh, what kind of band do you play in?”

The Sounds of the South Dance Orchestra is marketed as a “show band”, like you would see in a Vegas showroom, or with Bette Midler. If pushed further, I urge them to offer up musical styles, like Blues Brothers or B-52’s or other, “modern” groups.

(Of course, even those acts are somewhat dated. But, they are still in the nostalgia bracket of the targeted marketing group, and it’s the kind of music that they want to hear from a group that they hire.)

With our mix in the book, we can do a four-hour show with a good mix of rock, pop, disco (women still love disco, corny or not) and other styles to please the ear and eye. Getting us there has been a considerable journey.

Before taking my approach, most instrumental heavy groups are going to need to shift the mix in their book away from the 40’s swing and ‘50’s jazz, and “modernize” their spectrum of music. Only then can you break free from the “tyranny” of Miller, Dorsey, Goodman et Cie.in your performances.

However, it’s not to say that there’s anything wrong with Chattanooga Choo-choo or Four Brothers. It is fine music in its own right, and will be played for many years to come. Hobby groups and “rehearsal bands” can play nothing but and be very happy while doing so.

And, if someone wants Benny or Tommy or Glenn (or Woody, or The Monkees, for that matter), we can produce a very reasonable facsimile. Swing gigs are more fun for the horn players, and the vocalists seem to enjoy them as well.

But, the current demand, when the guys with the smoke machines and the turntables do not completely suck every bit of it up, is for stuff written after 1960. Time to move forward if you’re not just doing it for fun.

Terry L. Stibal
Leader of Houston’s Sounds Of The South Dance Orchestra
Offering the music of yesterday, today and tomorrow…the way you want to hear it!
Visit us at www.sotsdo.com

Just an itinerant saxophonist trying to find life between the changes. I have retired from the Corps of Engineers and Microsoft. I am an admin on the Woodwind Forum, run the Seattle Solid GOLD Big Band (formerly the Microsoft Jumpin' Jive Orchestra), and enjoy time with family and friends.
View all posts by Gandalfe →
This entry was posted in advice, Band, Band Management, Big Band, Culture, Dancing, Entertainment, Female vocalists, Guides, Jazz, Music, Vocalist and tagged Benny Goodman, Chattanooga Choo-choo, glenn miller, Monkees, Tommy Dorsey, Woody Herman. Bookmark the permalink.