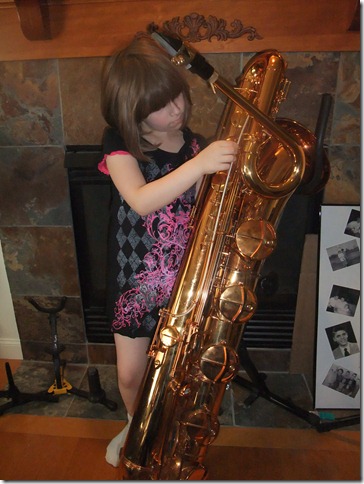 My little granddaughter Amber, Josie’s daughter, thinks she wants to play clarinet or sax. As she is just six, I have given her a recorder which she hasn’t made much progress on. However, she does spend some time on the piano. Still the photo ops are plentiful as she noses around the study looking for things to do.

On piano we have been trying to get her to incorporate her left hand. And after a week or so she can play a simplified “Jingle Bells”. You might remember I worked with my grandson Nick for three years. He played alto and bari sax, clarinet and bass clarinet into Junior High school. Then he dropped them in favor of unstructured drum and guitar time. He even had a pick-up group that practiced for a few months in a friend’s garage. 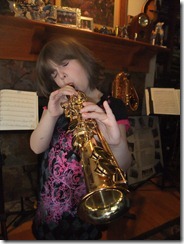 At six Amber is an avid reader, an indicator to me that she has the potential and desire to do whatever she wants to. She amazes people all the time with her ability to read at the Sixth grade level. It’s almost like a parlor trick, but she pretty much learned to do it by watching her mother and me read to her.

Here’s hoping she will follow through with what has become a lifetime passion for Suzy and me, that of music performance. With Amber, unlike with Nick, I’m am trying not to demand the time and effort it would take to be a decent player. First of all, she has started at a much earlier age than Nick did. And she does tend to spend more time on her projects so far.

She and I are listening to Mannheim Steamroller’s Stille Nacht, one of my favorite arrangements that they do. Here’s hoping you are spending time with those you luv.

Just an itinerant saxophonist trying to find life between the changes. I have retired from the Corps of Engineers and Microsoft. I am an admin on the Woodwind Forum, run the Seattle Solid GOLD Big Band (formerly the Microsoft Jumpin' Jive Orchestra), and enjoy time with family and friends.
View all posts by Gandalfe →
This entry was posted in Bass Sax, Christmas, Family, Saxophone and tagged Mannheim Steamroller, piano. Bookmark the permalink.

1 Response to Amber Admires the Sax