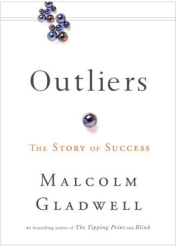 I have been espousing the 10,000 hours to become a professional (in this case for music) for a while now and a friend of mine attributed that to the book Outliers by Malcolm Gladwell. Wikipedia has a nice little blurb about the book.

“Outliers is a non-fiction book written by Malcolm Gladwell and published by Little, Brown and Company on November 18, 2008. In Outliers, Gladwell examines the factors that contribute to high levels of success. To support his thesis, he examines the causes of why the majority of Canadian ice hockey players are born in the first few months of the calendar year, how Microsoft co-founder Bill Gates achieved his extreme wealth, and how two people with exceptional intelligence, Christopher Langan and J. Robert Oppenheimer, end up with such vastly different fortunes. Throughout the publication, Gladwell repeatedly mentions the "10,000-Hour Rule", claiming that the key to success in any field is, to a large extent, a matter of practicing a specific task for a total of around 10,000 hours.” – Wikipedia

So I ordered the book for my Christmas break reading on my Kindle. Beth Jameson sez this about the book:

“The main tenet of Outliers is that there is a logic behind why some people become successful, and it has more to do with legacy and opportunity than high IQ. In his latest book, New Yorker contributor Gladwell casts his inquisitive eye on those who have risen meteorically to the top of their fields, analyzing developmental patterns and searching for a common thread. The author asserts that there is no such thing as a self-made man, that "the true origins of high achievement" lie instead in the circumstances and influences of one’s upbringing, combined with excellent timing. The Beatles had Hamburg in 1960-62; Bill Gates had access to an ASR-33 Teletype in 1968. Both put in thousands of hours-Gladwell posits that 10,000 is the magic number-on their craft at a young age, resulting in an above-average head start.”

Should be an interesting read. What’s on your list for the holiday season?

Just an itinerant saxophonist trying to find life between the changes. I have retired from the Corps of Engineers and Microsoft. I am an admin on the Woodwind Forum, run the Seattle Solid GOLD Big Band (formerly the Microsoft Jumpin' Jive Orchestra), and enjoy time with family and friends.
View all posts by Gandalfe →
This entry was posted in Books. Bookmark the permalink.